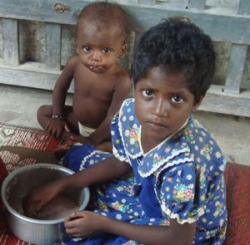 cannot always build the future for our youth, but we can build our youth for the future.
~ Franklin Delano Roosevelt ~

Some 300,000 internally displaced persons (IDP), many of them children, live in government camps in the north, after fleeing fightings.

Concerns are growing that the number of malnourished children is higher than earlier estimated among thousands of recently displaced in Sri Lanka.

We are also very concerned about the suffering of pregnant and birthing mothers without access to medical facilities
It is estimated that 13 percent of the IDP population is younger than five, with one in four or some 10,000 children suffering from acute malnutrition, humanitarian sources told IRIN.

Their situation has become worse. Women who have given birth to babies recently are experiencing complications from bleeding and there are no hospital facilities available in the area.

With no kerosene oil, there are no lamps to light up the camp site area and children and women are at high risk during the night. Most of these tents are going to flood due to the heavy monsoon rains, so families are going to face additional difficulties

If you would like a full progress report on LCH’s work to help the nutrition for displaced children is available by emailing
admin@lotuscaringhands.org.uk

We, Lotus Caring Hands (LCH) is a United Kingdom. based charitable organisation enabling social and economic development through skill and educational development in Sri Lanka.

The 30 years long armed struggle has wiped-out sea of opportunities and created huge skilled gap. A wide range of individuals, children, youths and adluts were affected and their ability to compete with rest were restricted and  LCH is taking every step possible to narrow the skill gap and increase opportunities for them.